If you’re connecting two machines with just a single network cable, like we did with parallell and serial cables back in the days, you’ve no doubt used a crossover cable. But why is this?

Well, a straight cable, like the one in the left picture, has the wires coming out on the same side of the cable as they go in. This means that What your computer sends out on pin 1 comes in on pin 1 on the other side. Both sides having similarly designed network cards, this will be a problem, because the second computer will also be configured to send on pin 1 and thus can’t listen to it.

Thus, you need a crossed cable, where pin 1 on one side doesn’t end up at pin 1 on the other side, but rather at a pin which the network card there knows it should read from… and the other way around.

bleh. I just wanted to put these pictures somewhere so I knew where to find them, should I ever have to chop up a straight cable to make a crossover cable again. I’m not going to explain all this crap, but what’s important here, at least for me, is that if you have a straight cable, you can cut it on the middle, then strip all the small wires inside and connect them to eachother like the spreadsheet to the rigth shows, and it will be a crossover cable. 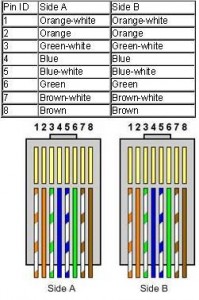 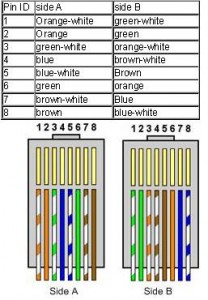